When positive actions are combined with positive thinking, it results in success. There is no limit for the learning, achievements and success. This is proved by the alumnus of Arya College of Engineering & IT, who studied Automobile Engineering but moved his way towards his passion and dream. We had a quick discussion with him recently, where he recalled his college days and shared his journey and plans with us. While asking for his family, he says that his Father and Brother are business men and Mother is a housewife. They appreciated him in selecting the Best Engineering College in Rajasthan; as Science attracts him and he never want to go for Computers. After a huge research, he found a great interest in Mechanical Engineering, which is a part of Automobile. He finds his first choice in Arya and felt proud to be the part of Top Engineering College in Jaipur.

Apart from this, he worked for the Indonesian project, where he dubbed a song in his own voice in an Indonesian Language. When asking for the future plans, he says that he is working on multiple projects. As soon as he will get time, he will plan other projects. As part time work, he managed and coordinates different kinds of events. His main aim was to do movies and films. He wants to bring unique concept to the film and the television so that he can rule the industry. He got popularity through the Television serial named, "Thapki Pyaar Ki" on Colors, where he performed as a main lead. Also, He won the Best Debutant Award for his character Bihaan Pandey in Colors Golden Petal Awards 2016.

Apart from the academics, he has a great interest in Theatre even before he joined the college. During his graduation programme, he managed most of the events held by the department as well as college. He got lots of support from the event coordinator and mentor Sir Sanjay Maghnani. He offered lots of other opportunities also, during the event with proper management and protocols of the college to the students. He has experience of 4 years in theatre and drama and more than 60% of the actors from Ravindra Manch and Jawahar Kala Kendra are accompanied by him in various plays and shows. Talking about his college days, he says, When I was in college, Arun Arya Sir used to motivate us with his words, "Do whatever you want to do, but give it your 100%." 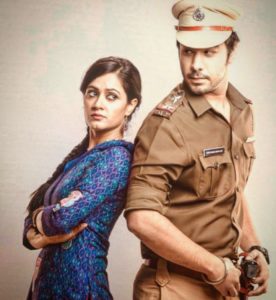 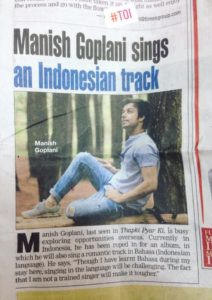 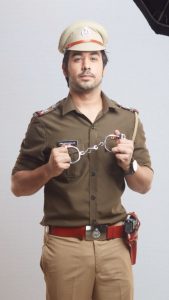 When we asked him about the opportunity to step-in in television, he says that during the first year of the college, he got his first TV show named as “Chori tera gaanv bada pyara” through ZEE-Marudhara Channel and worked there for 6 months. He made so many contacts during his work. Currently, he is working as a main lead in a ZEE-TV channel in “Detective Didi”. As he was the part of theatre, producer of the serial came to Jaipur in search of his heroine. He asked him to visit ICG College. Read Also: Arya’s Proud – Avinash: Working for disable students He coordinated the whole audition due to his good experience in modeling and theatre. The session was of 30 minutes duration with the auditions of more than 400-500 girls. He was accompanied by the producer itself who has also written a script for Kapil Sharma Show. Due to his hard work and efforts, he himself was asked to give audition for the main lead of the serial. With his experience, he performed well and got selected for the position and is currently working on the programme.

Apart from his career; he said that he missed his college the most. He missed his lectures with friends and faculties. As his subjects was the most interesting one and the studies at Arya College were very relaxing. He had found lots of innovative ideas form regular activities held at college. He also missed his canteen and the events he used to manage and coordinate from production design to its execution. He believes that his journey at Arya College was so beautiful and he created lots of memories during his graduation period. On asking about the learning of his struggle, he says that everybody should follow their passion and their dreams. No matter, what studies you are pursuing, always put your steps forward towards your goals and passion, as passion can take you, where you deserve to be. If you have already chosen engineering, focus on it as your graduation degree.