India is a developing country. In the world of modernization, there are people who still believe that women cannot participate in the field work and industrial places, most of the women are found working in the offices. But, it is successfully proved many times that when they are given opportunity or a better chance, women is proved better than other male colleagues in terms of efficiency and their results. Usually, the women officers working in electricity department are engaged in their office work but the innovation for the members of DISCOM has provided various opportunities to female candidates. They played significant role in the destruction of the planning of the department. The junior engineer of electricity department of Rajasthan, Anu Bishnoi has transformed these chances into better opportunities.

Anu was recruited in the electricity department of Rajasthan which comes under the department of Jodhpur Vidyut Vitran Nigam limited in Shri Ganganagar. She is working as a manager of maintenance and operations in this field. With her working efficiency, she played an important role in reducing the depreciation faced by electricity department. Also, she prohibited illegal connection in sensitive and religious areas and placed new electricity meters with her courage and determination for the masses. 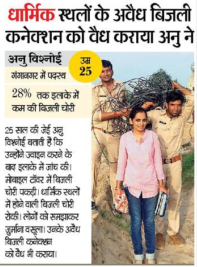 In India, the emotions of different religions and their problems are very normal. But Anu has communicated the believers of society and various religions based on different level. She described the use of electricity and the process of operating meters in detail. She not only prevented the use of illegal electricity but recovered the whole penalty by transforming all the illegal connections to legal one and established various principles and values for the society. 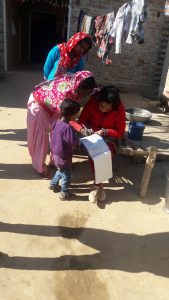 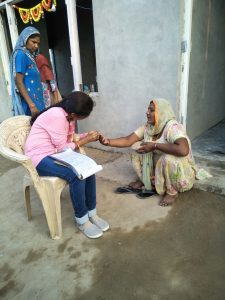 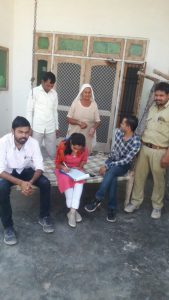 After completing the education of school in the town of Rai Singh Nagar of Shree Ganganagar in Rajasthan, Anu Bishnoi had completed her graduation with Rajasthan technical university associated with Arya College of Engineering and IT in 2013. Due to the hard work and struggle since her childhood, she has been selected as the Junior Engineer in Rajasthan electricity department in 2015 and joined the office in Shree Ganganagar. Few days after her joining, she started working in the reduction of frauds of electricity in the society. According to 25 years old Anu, a private company found breaking the electricity from mobile tower and she immediately recovered all the penalties and helped them in turning illegal connections to legal, in the starting days of her working. She was appreciated and motivated in the electricity department of Jodhpur, while working under the managing director of the department and proved inspiration for many people. Even after the belonging from the family of farmers, her struggle and hard work is proved as great achievements which results in a government job. Also, she has set an example for other women in a country and raised the influence of women empowerment over men.