Robots play a very important role in our lives based on the requirements of today’s time. It can accomplish any task of human-being or the work that cannot be done by a person. But what if robots are used for the racing purpose. This idea is evaluated and implemented at Thar'18 organized by Rajasthan Technical University Kota. The vent invited many colleges to participate and develop their ideas into reality and won exciting prizes. Read Also: Arya College is Organizing National Motivational Lecture by Shri Pawan Sinha

Students of Electrical and Electronics & Communication Department of Arya College of Engineering and IT participated in Track-O-Mania and earned the Second position out of 10-15 teams in the competition in 1 Minute 50 Seconds. In this, students have to command over the autonomous line follower robot at a pre-defined track having black and white contrasting colors that were must to complete maximum points in minimum time. 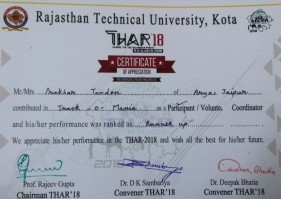 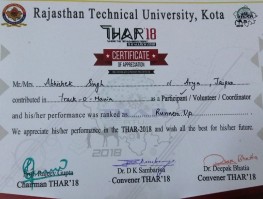 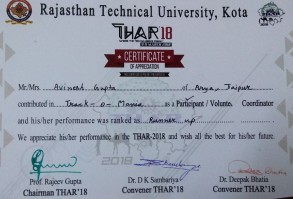 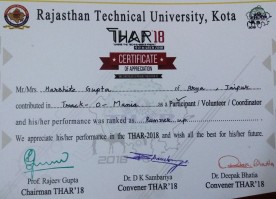 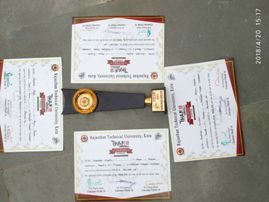 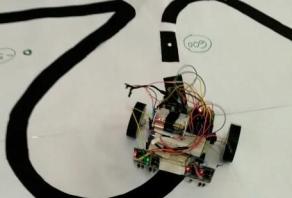 The used robots in the competition were the mobile machine that detected and follows the line drawn on the floor. The path or the track was predefined and were visible like a black line on a white surface or a white line on a black surface with a high contrasting color. Participants were asked to complete the paths as per rules and regulations. Participants who had completed the track in less time have scored maximum points were declared as a winner. In case of the tie, the designs of the robot were considered. Read Also: Arya College is Organizing Blood Donation Camp As per the requirements, participated teams were given enough time to make the changes. For the final round, only three teams were selected. Maximum three minutes were given to each team to complete the task and the failing teams were disqualified directly from the competition. For qualifying the final round, it is important for all the teams to follow certain basic rules, some of them are as follows: Read Also: Arya College: Top 10 in Smart India Hackathon 1. Maximum 3 touches were allowed for each round (Each touch contains 5 point penalty.) 2. Maximum four Participants were allowed in a team. 3. Any teams involved in any type of argument with the judges were disqualified. 4. The organizers reserved the rights to disqualify any team indulging in any kind of misbehavior. 5. The organizing team has the right to change any of the rules at any time. Home Page